Our  2013-2014 project house is like an old friend. It’s a gigantic Builder’s Victorian Philly Split. This is the fourth one of this style house we’ve done and it’s our favorite layout and proportions.  The people that live in the last three of these tell us they love them.

There are two units. Unit 1 is the whole first floor and one bedroom on the second. Six rooms with three bedrooms and two baths. 1150 sq ft.

Unit 2 is on the second and third floors.  Eight rooms with four bedrooms, an office and two baths. 1700 sq ft.

he backyard is nice with a patio and pergola. There is a raised bed vegetable garden for each unit. 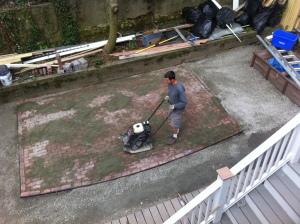